The inaugural function of the summer camp- “Camp Creative” was held on Tuesday 2nd of April, 2019. Total 56 no. of students had enrolled themselves for the summer camp. Principal Rev Fr Robert D souza, Vice Principal Ms Belita Mascarenhas, KG Co ordinator Ms Lydia D souza and a good number of parents witnessed the inaugural function. Under the leadership of camp co-ordinator Ms Lynette Pereira the programme commenced with the universal prayer followed by prayer song.

Fr Principal addressed the gathering and spoke about the various activities that would be conducted in the camp. He also assured the parents, the safety of the children in the camp. Students entertained the audience with the action song guided by Ms Lavita D souza. The children were taught to be creative and also bring out their own creativity. They prepared dolls out of sponge, beautiful paper lillies and lovely party mask under the guidance of Ms Vevian and Ms Metilda. Numbers of stories were chosen and the little actors were confident to enact these stories under the guidance of Ms Roche. Various songs and dances were taught. Camp gave them a feeling of close community where everyone learnt to respect each other and got values of life. It gave them a freedom to blossom in new directions. Healthy snacks and juices were provided by the school to the little ones. Children relished their snacks and were very happy. Various games were conducted like musical chair, tug of war, passing the plates, lion and the tiger, crossing the bridge etc.

On 12th of April an outing was organized to various places like St Aloysius Museum,  St Aloysius Chapel and Kadri Park. Children enjoyed travelling by our school bus.

On 13th of April a small programme – Finale was held. Parents were invited for the same. Children performed dances, enacted a story – Little Red Riding Hood, group action songs were sung. Rev Fr Robert D souza graced the occasion. He appreciated the children for their mesmerizing performances and gave a message to the parents to help their children to be as creative as possible. He urged the parents to encourage their wards to always have a feeling of sharing and caring for others, so that together we all can build a better society to live in a beautiful world. At last the children were felicitated with certificates and gifted crayons. Thus the Camp Creative for the creative kids conducted in LCS enriched both the teachers and children. 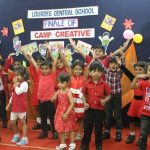 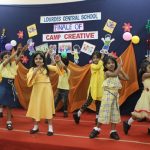 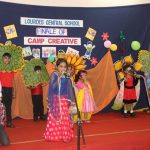 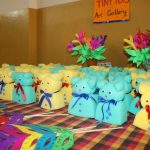 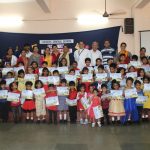