“Knowledge is the foundation of a man’s life” said Dr B R Ambedkar. 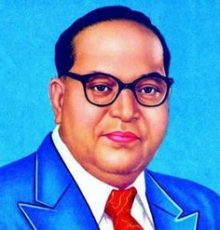 Ambedkar Jayanti or Bhim Jayanti is observed on 14th April to commemorate the birth anniversary of Dr B R Ambedkar who was born on 14th April 1891. Babasaheb Ambedkar’s first birthday was publicly celebrated on 14 April 1928 in Pune, by social activist and Ambedkarite Janardan Sadashiv Ranapisay. He started the tradition of Babasaheb’s birth anniversary or Ambedkar Jayanti. Ambedkar Jayanti processions are carried out by his followers at Chaitya Bhoomi in Mumbai and Deeksha Bhoomi in Nagpur. It is a customary for senior national figures, such as the President, Prime Minister and leaders of major political parties, to pay homage at the statue of Ambedkar at the Parliament of India in New Delhi. It is celebrated throughout the world especially by dalits, adivasi, labour workers, women and also those who embraced Buddhism after his example. In India, large numbers of people visit local statues commemorating Ambedkar in procession with lot of fanfare.

On 14 April 1990, Ambedkar was bestowed with Bharat Ratna award. The same year his life size portrait was also unveiled in the Central Hall of Parliament. The period from 14 April 1990 — 14 April 1991 was observed as “Year of Social Justice” in the memory of Babasaheb. Government of India Issued 10 Rupees and 125 Rupees coins in 2015 to mark the 125 Birth Anniversary in the honour of Ambedkar.

Dr. Ambedkar contributed a lot to the making of Indian Law and Education. Dr. Amdedkar formed a political party which was called as “Independent Labour Party”. After India got independence, he was the First Minister of Law and Committee Chaman who formed the Indian Constitution. Dr Ambedkar was a social reformer, an educationist, a warrior against casteism, an eminent economist, a nation builder and the architect to the Indian Constitution.

He believed in the oneness of all as the children of God and that all human beings are equal.

He believed in the Oneness of all as the Children

Dr. Ambedkar was a champion of Fundamental Rights. The Reserve Bank of India was conceptualised by the guidelines from his book “Problem of Rupee; its origin and its solutions.” He established the Finance Commission of India. He successfully led the struggle for reduction of work from 12 hours a day to 8 hours in 1942. He contributed the idea of setting up of Employment Exchanges in India. He was responsible for establishing the Central Technical Power Board, The National Power Grid System and The Central Water Irrigation and Navigation Commission. He played an important role in the establishment of the Damodar Valley Project and Hirakud Project.

To conclude, Dr B R Ambedkar enabled the abolition of untouchability and the outlawing of all forms of discrimination. He gave shape to our country of a complete Sovereign Socialist Secular Democratic and Republic based on Adult Franchise. Indian Constitution is undoubtedly of the highest order and due to all these outstanding contributions Dr Ambedkar can be rightly called “The Architect of the Indian Constitution.”