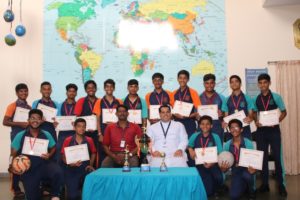 Milagres CBSE School had organized Inter-School Competition on 20th November 2019 in order to tap the talent of the students from Grade I to X.

The competition was conducted in different categories and our Lourdites bagged the Overall Trophy.

The students from our school won the following prizes.

Pranamya P Kotian and her team, Amyl Viva Barboza and Purvi Madhyastha of Class I bagged the First place in Moral Story Telling.

Evana and her team, Dharti Girish and Anika of Class V won the Third place in Moral Story Telling.

The students were given a platform to showcase their talents.

They learnt to be more confident and develop sportsmanship.