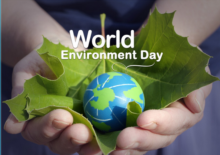 “It is not the strongest of the species that survive, nor the most intelligent, but the one most responsive to change.” – Charles Darwin

World Environment Day is the biggest annual event in the world run by the United Nations to mark environmental awareness among the people. Its main aim is to raise awareness to protect our nature and look at various environmental issues that are growing day by day.

The theme for 2020 is “Celebrate Biodiversity” and will be hosted in Colombia in partnership with Germany.  It is widely celebrated in more than 143 countries. It is popularly being called “People’s Day” to show their care and support for the Earth and the environment.

World Environment Day was celebrated on 5th June 2020 at Lourdes Central School by conducting awareness programme on “Celebrate Biodiversity” through E- learning for the students.

Biodiversity is the variation of Earth’s terrestrial, freshwater, and marine species, as well as their habitats. Biodiversity is vital to the survival of all life on earth and is also the cornerstone for the goods and services of the environment that allow human societies to thrive. Biodiversity provides us with food, water and resources as well as services such as climate control, pollination, flood mitigation and cycling of nutrients.

Ecosystems are relying on all parts from the smallest bacteria to the largest vertebrate. It’s all interconnected. Some are producing oxygen that others are breathing. Some provide food for larger species, which in turn become prey to even larger species. Every living organism has a role to play in the maintenance of balance.

First of all, it is important that we are very sensitive to environment related problems. The government of many countries is spreading awareness about the deteriorating balance of biodiversity among the people and is trying to overcome it quickly. It is also the responsibility of the people to take part in this noble work and it is one of the main prime action to protect our environment.